Erika answers the first question about her overall experience from being a member of the MAGIC Comenius project. She then comments about the three educational visits in the Netherlands, Slovenia and Greece.


Despoina is answering whether she actually learned anything new about media and how they managed to communicate with her fellow students from abroad.

Posted by Unknown at 6:06 AM No comments:

Email ThisBlogThis!Share to TwitterShare to FacebookShare to Pinterest
Labels: videos


After having visited Thessaloniki, on March the 26th we started our second part of our visit in Greece. We landed in Athens at late noon under a heavy rain! As soon as we got into our rooms we had some free time. 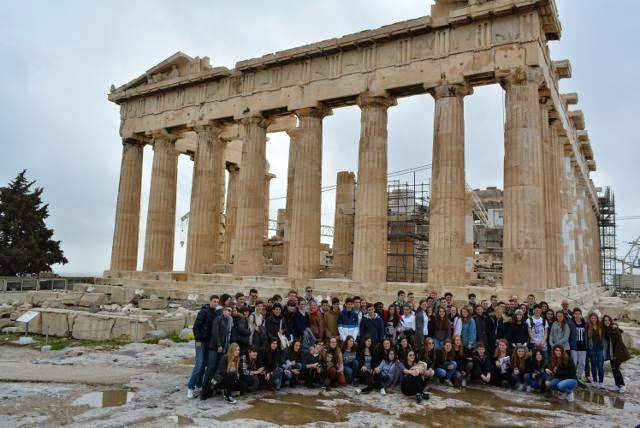 The second day in Athens we visited the Departent of Education Programmes of the Ministry of Education. All students and teachers were given two Museum of Acropolis and the Parthenon. We then walked around Plaka, had lunch and continued our walk at Thision. 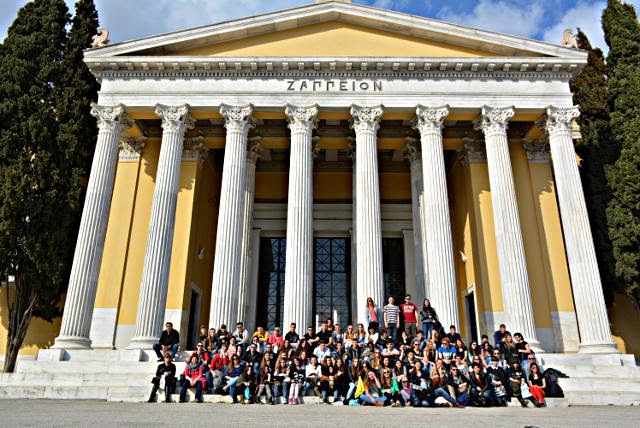 The last day in Athens we were guided into the Hellenic Parliament, visited the local market, walked at the National Garden, visited the Zappeion Magaron Hall Centre, the Panathenaic Stadium and the city centre.

Posted by Unknown at 2:39 AM No comments: 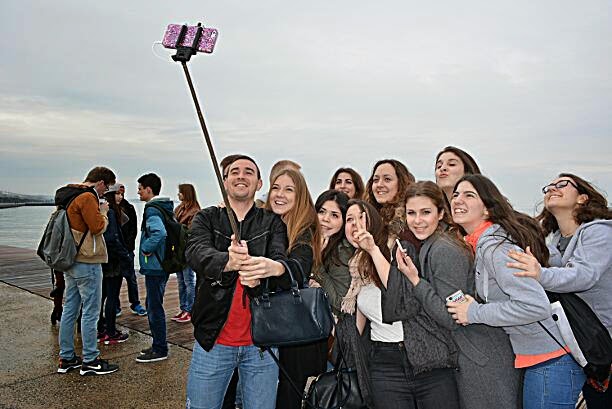 It was a great pleasurw to have all our partners in Greece this March! Ninety five students and teachers visited Thessaloniki from 22 March till 26 March and Athens from 26 March till 29 March 2015 according to our timetable. 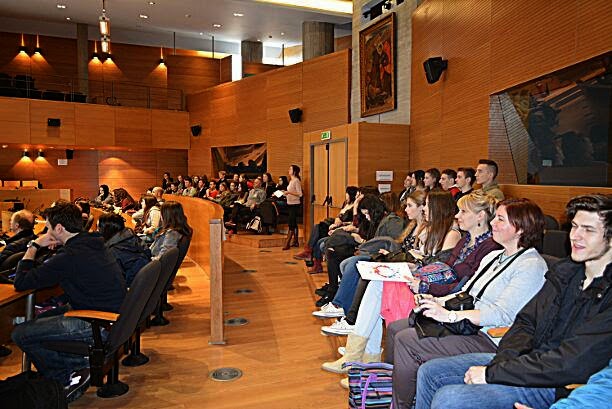 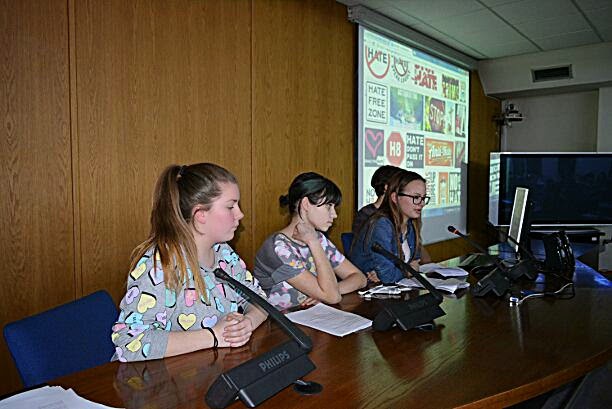 On March the 23rd the students and teachers of our MAGIC Comenius project visited the City Hall. The vice mayor welcomed the teams to the city. They then visited the Archeological Museum of Thessaloniki and the Museum of Byzantine Culture of Thessaloniki where they had the chance to take part into a play role game and present their findings. After lunch, we all gathered to the conference room of the University of Macedonia where students participated in our first workshop when students presented theme 4: "Media bias". 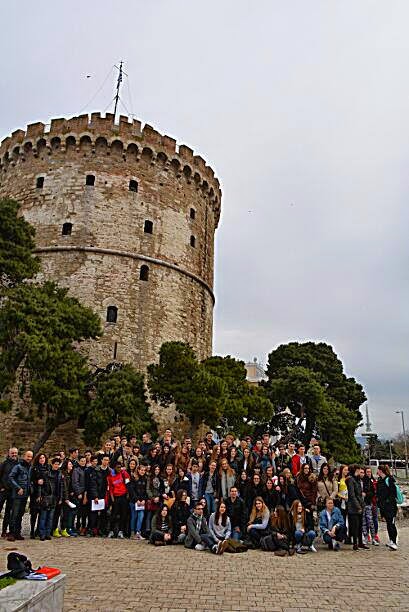 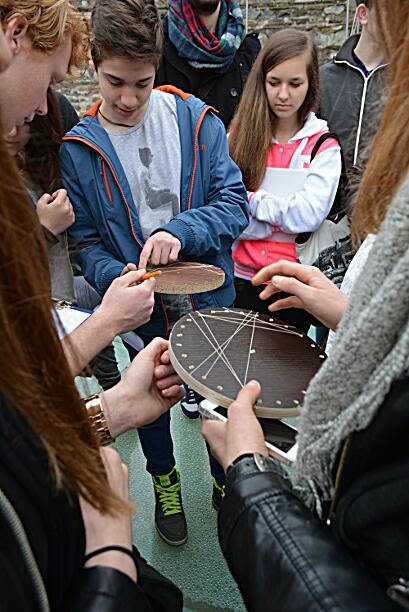 The next day the students and the teachers took part into play role game in Thessaloniki. The activities were organised by Dot2Dot. All teams visited the church of Saint Demetrios, the ancient forum of Thessaloniki and the Bey Hamam. After lunch we again had our workshops in the University of Macedonia.They formed three grouos:


All groups members collaborated, discussed their topics and came up with ideas and proposals according to their approach. They then presented their ideas to the rest of the teams.

On Wednesday 25th of March the students and teachers were guided into the city centre. They visited the old byzantine and ottoman monuments of Thessaloniki and had their last workshop. 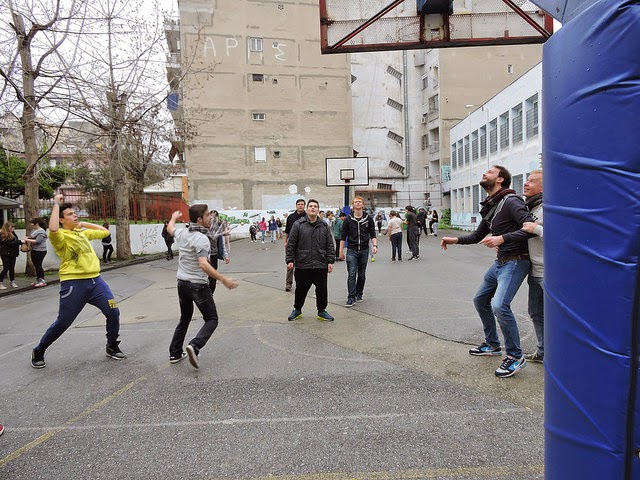 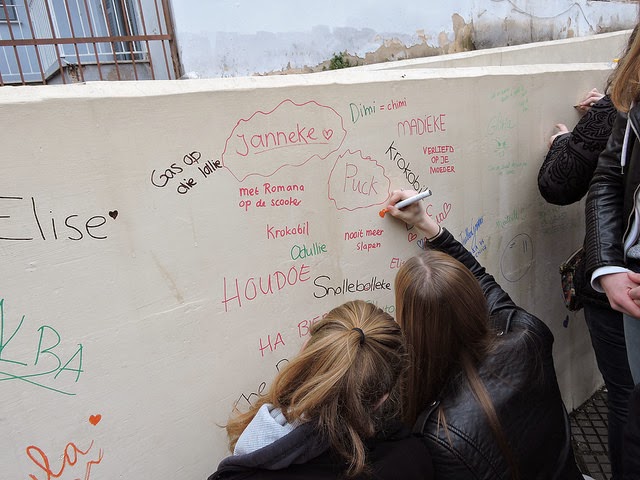 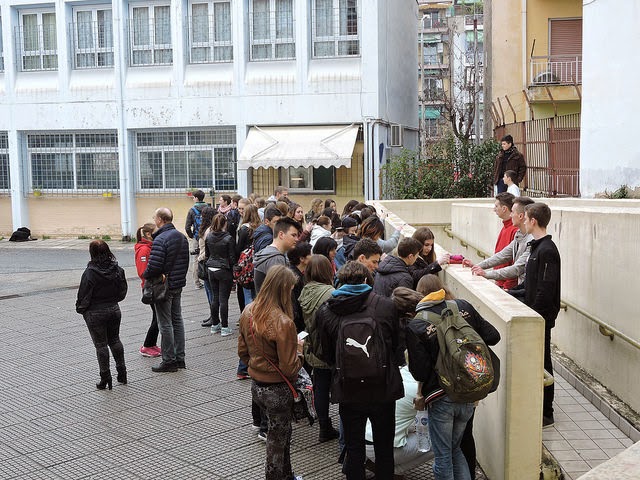 On Thursday 26th of March the students and teachers visited our school. Our head mistress welcomed the teams and the students had the chance to play basket ball in our school's playground and leave their message on a wall. After that all teams returned to the hotel, went to the airport and took our flight to Athens. Another great part of our visit in Greece had begun!
Posted by Unknown at 1:46 AM No comments:

Today, Sunday 22 March 2015, is the day that commences the third study visit of our MAGIC Comenius project. Students and teachers from Germany, Greece, the Netherlands, Norway, Slovakia, Slovenia and Spain are meeting in Thessaloniki, Greece.

Our team has worked hard to prepare this third study visit and our timetable is available for you to read. During these days we are going to take part to three different workshops about media. The workshops will take place at the University of Macedonia.

24 March, 2nd workshop: Students are going to form three groups. You may find the groups members at this spreadsheet. For this day's workshop teams will work these lesson plans:
All groups members will need to collaborate, discuss their topics and come up with ideas and proposals according to their approach. They then have to present their ideas to the rest of the teams.

25 March, 3rd workshop: Students will fill a digital story telling questionnaire about mass media. They will then work in their three groups according to this plan.
Posted by Unknown at 7:02 AM No comments:

On Tuesday the 3rd of Mach 2015 Theo was interviewed by two journalists on the Egnatia TV, a local TV station of Thessaloniki. Theo talked about the MAGIC Comenius project and its themes, the study visits in the Netherlands, Slovenia and the coming visit in Greece.

Posted by Unknown at 8:44 AM No comments:

Bias by selection of sources – including more sources that support one view over another.  This bias can also be seen when a reporter uses such phrases as “experts believe”, “observers say,” or “most people believe”.  Experts in news stories are like expert witnesses in trials.  If you know whether the defense or the prosecution called a particular expert witness to the stand, you know which way the witness will testify.  And when a news story only presents one side, it is obviously the side the reporter supports.  (Journalists often go looking for quotes to fit their favorite argument into a news story.)  To find bias by use of experts or sources, stay alert to the affiliations and political perspective of those quoted as experts or authorities in news stories.  Not all stories will include experts, but in those that do, make sure about an equal number of conservatives and liberals are quoted.  If a story quotes non-experts, such as those portrayed as average citizens, check to be sure that about an equal number come from both sides of the issue in question.

Bias by story selection – a pattern of highlighting news stories that coincide with the agenda of either the Left or the Right, while ignoring stories that coincide with the opposing view; printing a story or study released by a liberal or conservative group but ignoring studies on the same or similar topics released by the opposing group.  To identify bias by story selection you’ll need to know the conservative and liberal sides of the issue.  See how much coverage conservative issues get compared to issues on the liberal agenda, or liberals compared to conservatives.  For example, if a liberal group puts out a study proving a liberal point, look at how much coverage it got compared to a conservative study issued a few days or weeks earlier, or vice versa.  If charges of impropriety are leveled at two politicians of approximately equal power, one liberal and one conservative, compare the amount of coverage given to each.

Bias by placement – Story placement is a measure of how important the editor considers the story.  Studies have shown that, in the case of the average newspaper reader and the average news story, most people read only the headline.  Bias by placement is where in the paper or in an article a story or event is printed; a pattern of placing news stories so as to downplay information supportive of either conservative views or liberal views.  To locate examples of bias by placement, observe where a newspaper places political stories.  Or whenever you read a story, see how far into the story each viewpoint first appears.  In a fair and balanced story, the reporter would quote or summarize the liberal and conservative view at about the same place in the story.  If not, you’ve found bias by placement.

Bias by spin – Bias by spin occurs when the story has only one interpretation of an event or policy, to the exclusion of the other; spin involves tone – it’s a reporter’s subjective comments about objective facts; makes one side’s ideological perspective look better than another.  To check if it’s spin, observe which interpretation of an event or policy a news story matches – the liberal or conservative.  Many news stories do not reflect a particular spin.  Others summarize the spin put on an event by both sides.  But if a story reflects one to the exclusion of the other, then you’ve found bias by spin.

The above information is excerpted and adapted from How to Identify Liberal Media Bias by Brent H. Baker, Vice President for Research and Publications at Media Research Center.
Posted by Unknown at 5:16 AM No comments:

Today we received an email from a strange man called Mark Ignotus. His email is quite strange. Please read it carefully, especially those of you travelling to Thessaloniki! 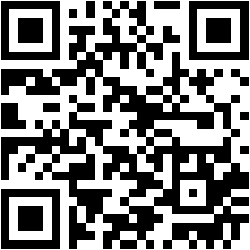